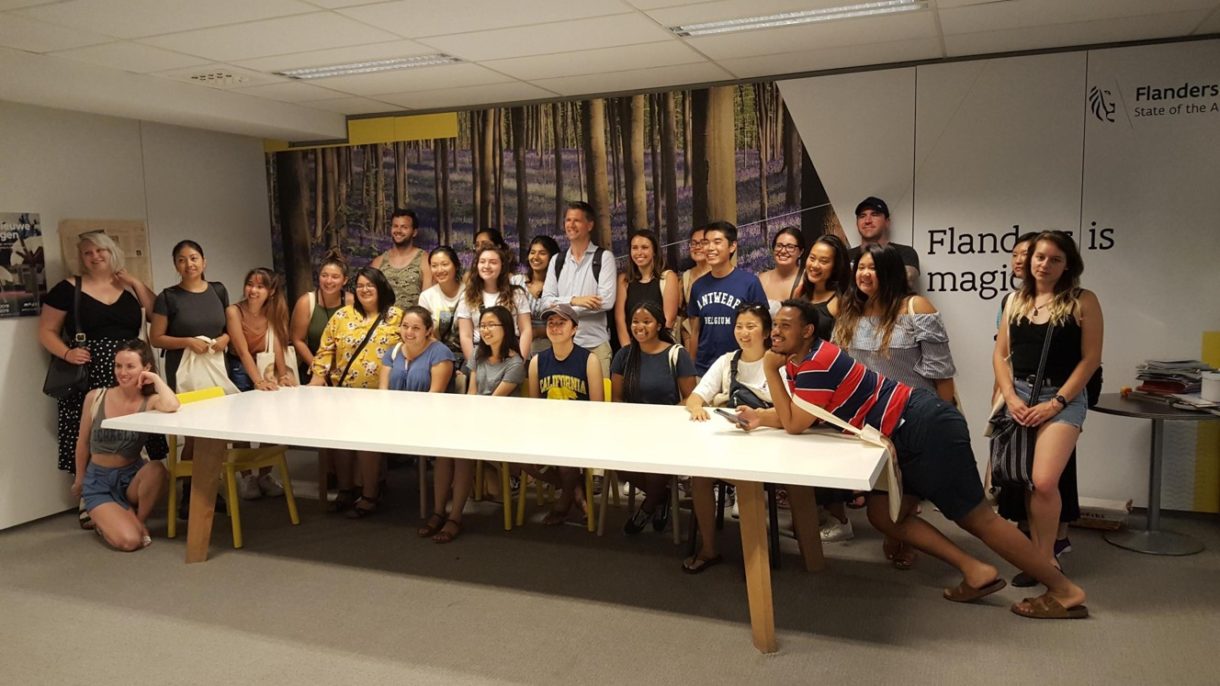 An intensive one month visit to the Low Countries: two weeks in the Netherlands, two weeks in Belgium, Flanders and Brussels. That’s what 26 American students from Berkeley University in San Francisco and their Flemish professor Jeroen Dewulf have just completed. They concluded their trip at VISITFLANDERS where they exchanged ideas on Travel to Tomorrow.

“I’ve been to a few European countries before coming to Belgium, and while I was there, the majority of my time was spent in the most tourist-heavy areas, but it was not until I read the ‘Travel to Tomorrow’ magazine did I really begin thinking about the effects of tourism and how to make it as sustainable as possible.”

This is just one of the many reactions VISITFLANDERS received as a result of a ‘Travel to Tomorrow’ workshop which 26 students from Berkeley university (San Francisco) attended on July 26 in Brussels. The workshop – hosted by VISITFLANDERS – marked the closure of the one month travel/study course which took them to the Netherlands and Belgium and was organized by their professor Jeroen Dewulf.

Prior to the workshop the students were asked to read our ‘Travel to tomorrow’ magazine and develop an example on how they would make something happen in their field of study or environment that would have a positive impact on tourism, on local communities (including residents, visitors, entrepreneurs) and on our destination.

This assignment raised many questions, concerns and ideas, but in general most of the respondents acknowledge that the tourism industry needs drastic reform and creating a movement of awareness, respect and amicable cultural exchange is a first step towards improving the future of tourism.

Here’s a small selection of the student’s personal and often critical but constructive feedback on their trip to the Low Countries and their ‘Travel to Tomorrow’ assignment:

“As a young person interested in recreational and academic travel, it is important to consider the social, economic and environmental impacts of my travels. I am personally passionate about social sustainability for low income families and tourism as a means of cultural exposure and enrichment. Based on my own experiences and the various strategies laid out in ‘Travel to Tomorrow’? I envision two main approaches to resolving the fragile balance between interests of residents and visitors without sacrificing economic benefit and sustainability: establishing housing protections for lower-income household neighborhoods and owners to prevent displacement by a competitive traveler hosting housing market (cfr. Airbnb) residents and a cultural shift towards the ‘leave no trace’ minimalist mentality.”

“When we were visiting especially popular cities such as The Hague and Antwerp, we would come across large groups spanning at least 10 to 20 people, and the tour guide would be speaking into a mic, blocking narrow streets and producing a lot of noise. Alternatively, when we were invited for dinner by a Flemish family, I felt more connected to the area we were in and the Flemish culture, and enjoyed the less bustling serenity of the neighborhood. If a local family hosted a guest family, the hosts could knowledgeably avoid huge traffic, using their personal views to enrich the guests’ experience, which is more rewarding than a scheduled tour on a bus.”

“As a civil engineer who is planning to specialize in transportation engineering, I know that no matter where you go, the quality of the transportation systems in the region can make or break your experience as a whole.”

“Too often we observe locals simply catering to the needs of visitors, functioning in a very limited employee-consumer relationship. However, what I’d like to see occurring to have a positive impact on the future of tourism is more opportunities for connection with the culture and local residents. In this program, we were welcomed into the home of a Belgian family for a homemade dinner. Not only did this experience give me a new appreciation for the food and culture of Flanders, it also allowed me to have a genuine conversation with citizens of this area. Just engaging in conversation in this low pressure environment helped us connect as people and bridge our cultural differences.”

“One specific way journalism and social media can further bridge this gap (ed between locals and visiting travelers) is by providing content focused on how to respect a community when visiting a space, such as following local recycling practices, eliminating excess waste, and controlling noise pollution. Other important subjects can relate to highlighting less well-known places such as museums, restaurants, shops, and landmarks to divert attention away from the Eiffel Towers and London Eyes of the world and more towards small businesses that could benefit from an economic standpoint and give travelers a more personal and unique encounter with an unfamiliar culture.”

“On this program, I have definitely experienced the overcrowding of tourists, in particular in Amsterdam. The city felt so chaotic and a few locals told me that their city was being ruined by hordes of tourists that generate too much noise, pollute the environment and drive up the prices of everything. …..One main contributor to over-tourism is that flights are getting so much cheaper. Airlines like Ryanair, which I have used, has made it so easy to do regional traveling in Europe. Just recently I booked a roundtrip from Prague to Copenhagen for only $41. Another contributor is new travel services like AirBnB…. I think there can be solutions to over-tourism that Flanders could implement before it’s too late. The government could increase taxes on tourist and use the revenue for the locals. When it comes to my field of study (architecture), what could really help is halting the number of new hotels built. …It is essential for there to be a balance between locals and tourists. The government must create framework, increase the number of tourist police at tourist hotspots, ban new takeaway shop and take steps to limit the numbers of new hotel rooms. I think these are all sustainable ideas that could help the locals and keep tourism at bay.”

“In the video ‘Travel to Tomorrow’, one quote stood out: “Each journey brings more tolerance.” It is within this statement that I find the core advantage of traveling abroad. Tolerance, in this statement, does not imply a passive undertaking, but an active investment in learning. Specifically, learning about another’s culture, language, and history. I believe that in order to make the most out of travelling abroad it is imperative to immerse yourself in the culture and language of the place in which you intend to travel to. In addition, tourism is important to look at with a critical lens to understand who has access to and the privilege of traveling abroad. Lastly, at the local level there needs to be conversations with residents to address their concerns and brainstorm together possible solutions. As a Sociology major, I offer these three interventions centered on a societal solution beginning with the individual.”

“The activities I experienced were unlike anything I could have ever imagined–with many emotional connections being made to the art, history, and identity of the people. However, my main concerns lie within how the residents treated me and this had a profound (even negative) impact on my time in Belgium. Whether it was in a restaurant, museum, or even the Belgian Federal Parliament, I found many of the employees to be a source of negativity and outright rudeness to myself or others around me. Anna Pollock finds that the engagement with residents/hosts is crucial in finding a balance where tourists and residents can benefit from tourism. “If you can engage the host’s talent for welcoming people, it will really enrich tourism. What you then create is not something that has to grow bigger but something that must thrive and evolve” (15). Yet, my engagement with the locals continued to remind me that I was not welcome, nor was my business appreciated in contributing to them or their community. I felt that as soon as my non-native accent came through, I was discredited of any respect. Language workshops for both parties could aid in this, but even my effort to communicate in one or both of the official languages (Dutch and French) was dismissed. My foreigner status prevented some of the residents from wanting to engage with me in a manner that suggested they were grateful for tourist contributions at all. Thus, one example I would recommend to aid the tourism industry in Belgium would be to strengthen this bond between resident and visitor–perhaps more residents could try to remove themselves from the situation to see things from the point-of-view of the visitor, and this could help create a better experience for all.”

If the students were to write down their experiences in a book, what would be a suiting title?
“Lemons and oranges” was the most surprising answer. Let it be clear that this does not refer to the taste of these fruits, but to the color 😊.

We want to thank the students for providing us with their valuable and much appreciated feedback.